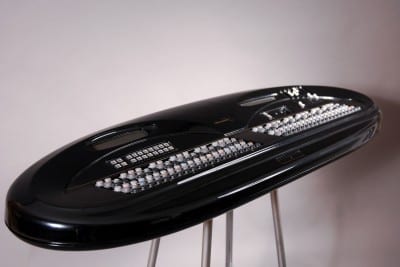 Developed according to the idea of Alain Daniélou and upon his request, and tuned according to his theory, the Semantic Daniélou-36 is an electronic musical instrument which was conceived by Michel Geiss, Christian Braut, Jean-Claude Dubois and Philippe Monsire. It follows on from a previous version, the S52, an instrument created by Claude Cellier and André Kudelski. The aim of the S52 was to provide a practical application to verify the theory, but it was quite difficult to use for musicians, mainy in terms of its ergonomy, and it offered only very basic sounds.
The Semantic is a musical instrument of its own kind. In order to simplify its use, Alain Daniélou decided to use only 36 of the 53 notes of the scale (3 choices for each of the 12 notes), the others being less essential in his opinion.
READ

Donate to the Foundation